On this day, I have merged all the posts from this blog to my current blog nosurplus.blogspot.com.

This blog will remain live and will not be deleted. However, if the current reincarnation of Kampus Sejahtera in USM is interested to take over this domain name, I am prepared to release it. No strings attached.

But don't fret, I wrote myself out of the job.

I prepared or rather drafted two papers (I didn't see the final version). The first one was to redesignate Kampus Sejahtera as the Sustainability Office. If you are a little muddled, yes, there was actually a Sustainable Office created about 2 years ago.

"What? You mean Kampus Sejahtera was not THE Sustainability Office? But it was doing all those stuff on sustainable campus, The White Coffin, Say No to Plastic Bags, etc etc etc."

Well, Kampus Sejahtera was never set as a sustainability office. And I have always maintained that it never had a mandate from the University to be the office responsible for sustainability. In a sense, the Penang people would say I was "keh poh chee" (loosely translated to mean "busybody"). No one was doing it, so I adopted the baby.

At the height of it's "popularity", KS was the place to get some funding for projects. Students especially liked to work with KS. But it was never a proper office, per se. Sometimes it was referred to as a Secretariat, sometimes just a Programme. There was just one coordinator (with lots of funding) and a clerk who also did other things.

I would say, with I hope, some modesty, that my work with KS made a (huge) impact on the University, in particular in helping its successful bid to be anoited the APEX University. OK, if you want to quibble, "selected for the APEX University programme".

I do remember writing to the then VC (Dzul) not to reappoint me as the coordinator more than 2 years ago, giving various reasons, amongst which was my very modest achievements. And I hated the administrative hassles (I was not given good support).

Then the new VC (Omar) came along in September 2011 and at one meeting he looked at me, so I said "Kampus Sejahtera is dying. It's a shame because it is a uniquely USM brand". He asked me to go see him. But I avoided him. And he didn't bug me or give me a hard time.

I cracked my head on what to do with KS without abandoning it to die, slowly. It's just too precious to let it dissolve into oblivion.

So, I thought. And I strategised. And I talked to key people. And I waited (this was towards the end of last year). For the concept to slowly work its way up. Basically, my idea was to merge the Sustainability Office and Kampus Sejahtera, with the former taking on the brandname of the latter. The crux of it was to institutionalise Kampus Sejahtera. To make it part of the administration. Of course, anything created in the University can be dissolved or disbanded when a new VC takes over (except those institutions or bodies created by Statute or approved by Senate).

Central to the idea was it would also be a tribute to our former VC Dzul who initiated Kampus Sejahtera 10 years ago when he was the Deputy VC. The ideals of Kampus Sejahtera will live on long after we have all served the university (I hope).

I have become more patient these days. So, I waited and then about 2 months back, the verbal greenlight was given to pursue the concept. So, I wrote a concept paper to be put to the highest management committee in the University chaired by the VC. And waited some more. The paper still hadn't gone up.

Along the way, we talked about what should be the focus and flagship project for KS to help the University in its APEX agenda. Very soon, a bunch of people are going to descend on the campus to demand that we show proof that we are indeed a sustainability-led university. So, I gently pushed for the revival of the Green Office programme. This was eventually embraced and I volunteered to write another concept paper and I called it "Pejabat Alamiah, the greening of USM offices" (ah, something like that). Funnily, when the paper went up, no one recalled anything about Pejabat Alamiah. The term was actually coined by Mohamed Salleh (Poet Laurete) after Dzul consulted him. So, that will now be out flagship project to operationalise sustainability in USM.

Eventually the two papers went up together sometime last week. And both were accepted (I was told). Technically, I won't be sacked (but who can say for sure). I wrote it such that when my current term expires at the end of the year, the post of coordinator will automatically become redundant.

So, who's in charge of Kampus Sejahtera. Well, there's a Sustainability Officer already appointed (Mahfuzah). We wanted the VC to be the CSO (Chief SO) but he thought it doesn't have to be him. So, the Director of CGSS (where KS is located) has taken on the role of CSO.

Me? I wrote myself a new job. I will (continue) to be Senior Fellow of CGSS attached to Kampus Sejahtera. (Hey, I already have an office there). I will not be doing all the running around anymore. I will stay in the background, visualising, thinking, dreaming, strategising, pushing, writing, documenting ... and generally continuing my role as "keh poh chee", without the stress.

Huh, I went to the clinic after the meeting to check my blood pressure. The nurse got a shock from the first reading, something like 158/???. The second reading was 147/???. The third reading was 127/77, pulse rate 68. The nurse was shocked at how fast my BP recovered (I said the high BP must be from the walk to the clinic but generally, my first readings are always high).

This blog will still be maintained as the KS blog. I will be inviting others to contribute.

In the meantime, if you really miss me, visit my more personal blog if you have nothing better to do. 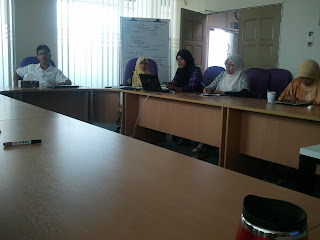 The new team at Kampus Sejahtera this morning
Posted by Lik Meng at 16:46 No comments: 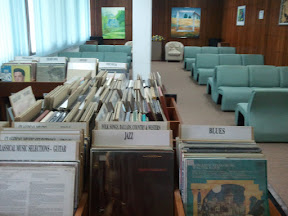 Music, light and easy, playing softly from speakers in front. But there's only one listener. Me!

This used to be THE place to hang out in the USM Library. Those were times when students didn't have smartphone which plays music.

I'm guessing hardly anyone comes here now. Yet the music goes on. I wonder what the cost is? Especially the carbon emission from electric consumption.